I thought that I would share with you some pictures from my recent holiday to The Gambia.

It is only 6 hours flight away from England and with no time difference and a place to go for Winter Sun. Temperatures go up to around 38 degrees in November. I stayed there for 2 weeks in a Hotel which is situated on the beach. 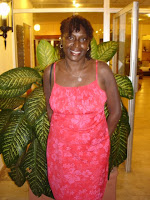 This was the "Roots" trip. I went to a place named Albreda and Juffure which is where Alex Haley was inspired to write the story called Roots which documented the life of a slave named Kunte Kinte and where his ancestors still live to this day. 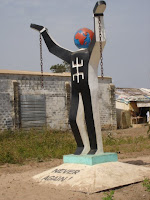 Beneath the statue are the words " Never Again" to describe the atrocities which occurred during the slavery years in the eighteen hundreds. No one can count the numbers of slaves who died during these years from either the direct or indirect results of the slave trade.
I also visited a slave museum which documented the whole history of the slave trade in the Senegambia up to the present day with icons such as Martin Luther King, Nelson Mandela, Barack Obama and Oprah Winfrey having their own place. 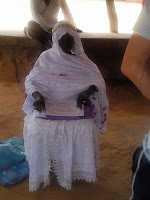 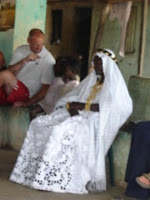 This lady is the seventh generation relative of Kunte Kinte and we met her in the house that he used to live in. She gave the interviews which informed Alex Haley's Roots film. 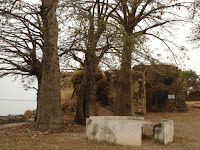 This island is called James Island and this is where hundreds of slaves were taken before making the long journey to the Americas and else where once sold. This island was much fought over by both the Portuguese and the British as it was felt that who ever held this island would dominate the slave trade. 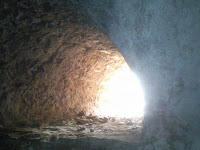 This is a punishment cell on James island where more than 30 slaves would be locked in with only a small window for light and the door was closed with Iron. There was no room to sit down and it was very oppressive with a low ceiling. Even though in this cell slaves would still be manacled. The idea was to break their will so that they would stop trying to escape from slavery. Slaves were seen as subhuman so any punishments would be justified. 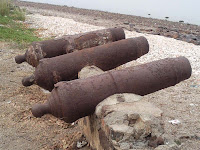 Cannons on the crest of the hill on James island.
This trip reminded me of what man can do to man and the justifications that can be made. At the end of the day it was all to do with economics and the sugar plantations. It is important that we never forget this part of history to ensure that it can never ever happen again. 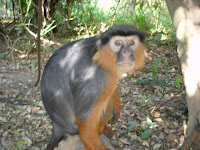 I visited a monkey park in Kololli and the monkeys were very friendly if they thought that you had some food to give them. They would crawl onto your shoulder, jump up to your hand and even look in your bag if you gave them a chance. They were really intelligent as they knew where to wait for visitors on the trail through the park and that this meant food for them. 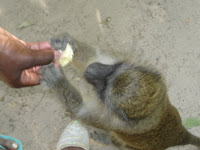 I fed them bananas which they took even though they preferred nuts. They very gently took them out of my hands. They even fought one another to get to my hand first with the fittest over powering the young and the weak to get the food. Needless to say I made sure that I fed the young and the weaker looking monkeys. 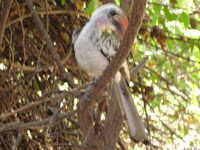 This Bird was in the monkey park and I took this picture because of its colourful beak. 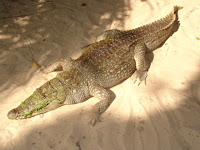 I also went to the crocodile park in a place named Kotu which is said to be a sacred place even to this day. The crocodiles live in a lake and there is a stone hut where infertile women can sit and bathe themselves in the sacred waters and apparently women have got pregnant from this ritual. 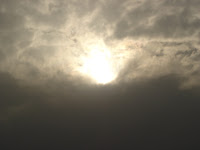 Finally the Sun was setting on the beach and I had to take this picture.
This is a slice of my recent holiday. I hope you enjoyed it.
Kittylocks
X
Please do not copy my pictures or my blog without my permission.
Posted by Kittylocks at Saturday, December 13, 2008

These pictures are amazing!

Thanks a lot for your comments and your suppor.

I cant wait for year 2 as from reading other blogs this seems to be when the hair really changes for the better of course.

You made me so homesick...i am originally from the gambia. Hope you had lots of fun on your break

Thanks Zee and pretty curls yes this was an amazing trip and one which I would love to repeat.
Everything was wonderful however I shall never complain about my lot as we met some people who had nothing and were still willing to share it with you.

Thanks for sharing. Reminds me of Ghana. We have the fortes and castles, cannons, slave rooms, punnishement cells and all the rest of that horror. I've never been to Gambia. It looks really good. I wonder, have the Hayley family been able to forge a relationship with their Gambian relations? They seem so very poor, perhaps their AA cousins can help them somehow.

Thanks Anthia-Ofo for your comments the no washing routine seems to suit some and not others. The Haley family seem to be well integrated in Gambuia and most regualr people in Gambia are poor ecconomically but rich spiritually and willing to share the little that they have. Happy christmas all and new year.

Oh someday, someday! My mother has had the great pleasure of a trip to Gambia - Enjoyed my armchair traveling through this post!

Kittylocks
London, United Kingdom
I have rediscovered after 27 years my love of all things natural hair. And now that I am a certified Sisterlocks(TM) Consultant I enjoy helping others on their journey of self discovery because Sisterlocks(TM) are not just a hairstyle. HAIR STATS: Installed: December 7th and 8th 2007 Time for installation: 20 hours Number of Locks: around 400 Retightening Schedule: Every 8 weeks Initial Colour: Clairol Textures and Tones Flaming Desire 8RO.Now no longer colouring. Hair cut back to shoulder length: February 2013 Now the proud owner of Kittylocks Hair Care Products which can be obtained from: http://Kittylocks.weebly.com COPYRIGHT: All photos and everything in this blog are my own psychological material and are not to be reproduced or copied without my express and written consent so please respect this. Now a certified Consultant. Finally let me know that you are there and comment comment comment!