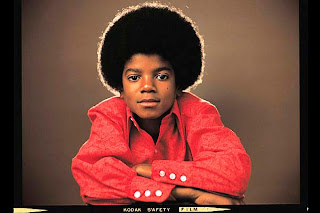 It is with great sadness that I learnt during the night of Michael Jackson passing from this world with a suspected cardiac arrest.
I grew up in the sixties and had to fight both physically and emotionally every day of my life with racist thugs. From the school playground to Teddy boys coming into our area to fight on a Friday night.
I have fought men and women in my bid to ensure that I have the same rights as every one else and that I am treated fairly in all things.
Throughout that time Michael Jackson and the Jackson 5 were legends. We used to run to the television to see them perform. They were able to instill in us black pride that we could achieve if we wanted to. I still to this day have all of their records and his albums.
He was a troubled genius who set the standards for both song and dance which still prevail even to this day.
This is the picture of Michael Jackson that I care to remember.
One with his brown skin, nappy, full hair and with all of his African and American features in tact.
I would like to offer his family and friends my sincere condolences and to hope that now he will truly rest in peace.

great post! he will definitely be missed...such a great loss!

Kittylocks
London, United Kingdom
I have rediscovered after 27 years my love of all things natural hair. And now that I am a certified Sisterlocks(TM) Consultant I enjoy helping others on their journey of self discovery because Sisterlocks(TM) are not just a hairstyle. HAIR STATS: Installed: December 7th and 8th 2007 Time for installation: 20 hours Number of Locks: around 400 Retightening Schedule: Every 8 weeks Initial Colour: Clairol Textures and Tones Flaming Desire 8RO.Now no longer colouring. Hair cut back to shoulder length: February 2013 Now the proud owner of Kittylocks Hair Care Products which can be obtained from: http://Kittylocks.weebly.com COPYRIGHT: All photos and everything in this blog are my own psychological material and are not to be reproduced or copied without my express and written consent so please respect this. Now a certified Consultant. Finally let me know that you are there and comment comment comment!